This is a hack of Pokemon Fire Red
Creator: Mitchel1
Original thread:
https://www.pokecommunity.com/showthread.php?t=242588

Firstly, I must thank jiangzhengwenjzw for fixing up the Climb Boots thing and removing the end credits. This patch would not be possible without his help.
Special thanks to jiangzhengwenjzw, 猪小P, thctbm for testing the game.

This hack was a pretty famous one back in 2009-2012, it's sad that this will never be finished. The truth is, it's almost impossible replicate what the creator planned to do to this hack. So the main purpose of making this patch is to make the four nice fakemon: Regiwater, Regighost, Regifire and Pendular obtainable in the actual game. So, don't expect this to be too faithful to the creator's idea.
The following things were fixed:
The broken tiles.
Some unfinished features like Climb boots.
The following things were added:
The four legendary fakemon: Regiwater, Regighost, Regifire and Pendular(They are the reasons why I made this patch)
The rest part of the region(Which is based off the world map)
The gyms(Which were based off the badges)
Some events(Not too much, I added them to make the game less empty)
Some legendaries are catchable after you beat the league(Pendular, the official regis, the legendary birds and Mew).
Screenshots: 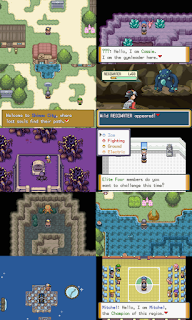 This in-game clock version was made thanks to jiangzhengwenjzw's help. Here's the version in which the clock runs 6 times faster than the real clock, and the pc time doesn't affect the in-game clock. This one is much better because the broken seasons were removed and the time-based events are much easier to trigger:

Here's the normal version in which the time is the same as your pc time and the broken seasons still exist.

29/04/2020 version changelog: Fixed the glitch which makes it possible for you to stuck in Torn World.
Fixed the Elite Four's dialogue.

11/03/2020 second version changelog:
Removed the mistakenly uploaded broken patch and replaced it with the correct one, this one should be the most stable one at present.

11/03/2020 version changelog: Fixed the glitch which makes it impossible to challenge the Elite Four twice.

Version 2.19.2020: Fixed a bunch of stuff
1)Ukulele Pichu's base stats was buffed.
2)Some more tiles were fixed.
3)Slightly changed the way to get Entei, now you can find it even if you failed to unlock the Entei event in the Tomb of Kha'laba.
4)Rival's pokemon have wrong moves when ukulele pichu was chosen as the starter.


Version 2.16.2020: Fixed a bunch of stuff
1) Deprecated palette swap when choosing items in bag menu
2) Fixed some minor events
3) Corrected some tile attributes
Warning: If you are playing the older version, do make sure to not to save in Xanateos Cave if you want to update your game. It would be safe if you save in PokeCenters.
发帖者 hacksrepairman 时间： 上午12:31